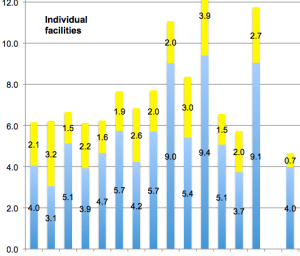 The Green Healthcare Programme has issued a set of new benchmarks for hospital waste in Ireland. These benchmarks are of great benefit to Irish hospitals who want to benchmark themselves against best practice.

The benchmarks are based on data from the first 17 hospitals participating in the EPA’s green healthcare programme during 2010. They include both risk and non-risk waste. Risk waste is clinical waste sent for sterilisation and for incineration. Non-risk waste includes general or domestic waste, recyclable waste and seegregated food waste.

While the use of “per bed day” may not accurately reflect all hospitals, it has been found to be the most appropriate indicator. Two types of hospital are covered – acute hospitals and so-called PCCC facilities (Primary Community Continuing Care facilities).

These are an update to a set of benchmarks originally provided by the Comptroller and Auditor General (C&AG). These earlier C&AG benchmarks were published in the following report “Comptroller and Auditor General, Report on Value for Money Examination, Department of Health and Children, Waste Management in Hospitals”, published in 2005 and based on 2002 data. These earlier benchmarks are also shown in the figure for comparison.

The amount of risk and non-risk wastes arising per bed day have increased somewhat. It is felt that food waste, which was often previously being macerated, may account for the increase in non-risk waste.

These benchmarks will be refined based on data from the additional participating hospitals in due course.

Green Healthcare, in conjunction with the National Health Sustainability Office (NHSO), are delighted to attend this key calendar event for…

A HSE Water Workshop was held in Tullamore at the Midlands Regional Hospital on 10th October 2017. Speakers and presentations…

Learn More
Read All News
Manage Cookie Consent
To provide the best experiences, we use technologies like cookies to store and/or access device information. Consenting to these technologies will allow us to process data such as browsing behavior or unique IDs on this site. Not consenting or withdrawing consent, may adversely affect certain features and functions.
Manage options Manage services Manage vendors Read more about these purposes
View preferences
{title} {title} {title}